This post is reprinted from the TasteFood archives in honor of NOMA Restaurant, awarded first place in S.Pellegrino’s World’s 50 Best Restaurants

Last summer we were in Denmark visiting friends and family during the summer solstice.  Miraculously, we managed to get a coveted dinner reservation at the acclaimed Copenhagen restaurant NOMA, and realized that our luck was only due to the general population out partying in traditional solstice style on beaches before bonfires rather than in restaurants.  Seizing our opportunity, we invited our Danish friends and hosts (who were more than happy to abandon tradition for a table at NOMA) to join us.

That evening, we dined on a fabulous prix-fixe menu consisting of 7 courses composed exclusively of ingredients hailing from Nordic countries.  (NOMA is an acronym for Nordisk Mad – or Nordic Food in Danish.)  A visit to this restaurant is highly recommended if you are in Copenhagen, although advance reservations are a must. It is a fantastic collaboration between Danish chefs Claus Meyer and René Redzepi, and played an important role in establishing the New Nordic Cuisine Movement.  All ingredients originate from Denmark, Sweden, Norway, Iceland, Greenland and the Faroe Islands.  They run from the familiar to the exotic: eel, musk ox, green strawberries, hare, seaweed, rye bread, black lobster are a few examples (quite out of context.)  You may feast on dishes such as Sautéed Dover Sole with New Danish Potatoes, Green Strawberries and Elderberry Sauce perhaps accompanied by Stirred Mashed Potatoes with Lumpfish Roe and Crispy Chicken Skin, and finish with Caramel Ice Cream with Icelandic Buttermilk, Dried Swedish Berries and Sorrel Crème Anglaise. 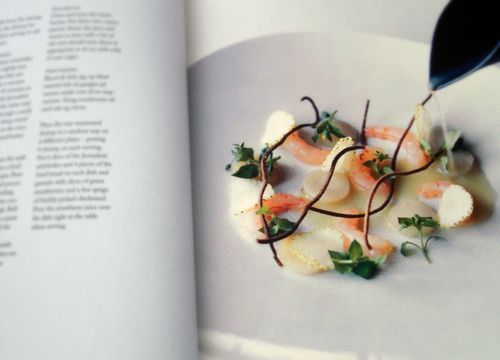 I enjoy poring over the NOMA Nordic Cuisine cookbook, which I bought as a memento after our meal. It is an inspirational and unique testament to Nordic terroir, and apropos several interesting blogs that attempt to prepare every single recipe in a particular tome of a cookbook, I would seriously have a go at reproducing NOMA’s – if only I could get my hands on chickweed, seakale and sweet cicely.  For now, I do what I always do and improvise with the seasonal and local products I find in my part of the world.

As we drove home after our long dinner, it was approaching midnight.  To the west the sun had just set, exiting the sky with a swirl of orange and purple flourishes in its haste to rise again. To the east it was doing just that, where the horizon was brightening with soft pink tinges nudging the gray-blue midnight summer sky.  It was truly a magical Danish solstice moment.

Copyright © 2008 – 2020 This work by Lynda Balslev is licensed under a Creative Commons Attribution – Noncommercial – No Derivative Works 3.0 United States License. Permissions beyond the scope of this license may be available at tastefoodblog.com.